The Nursery children have had a busy and fun week! In Literacy, they learned the story of Goldilocks and the Three Bears, linking into their core text: You Choose Fairy Tales. Ellee, Freya, Ethan and Ollie did a great job playing the main characters when they acted out the story! As part of their PSED, the children identified how each character might be feeling and were especially convincing being ‘angry’ Daddy Bears! They made suggestions for how Goldilocks could make up for what she had done wrong:

“Give them more porridge” Kairo

“Be friendly” Ellee and “Buy them a new bed” Remi 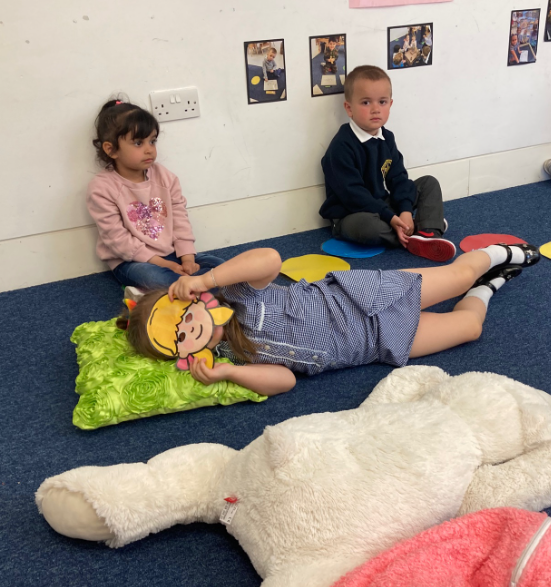 In Maths, the children learned about 3D shapes and their properties and enjoyed making party hats when learning about cones. Everyone in Nursery was very excited to see the special visitors to Rockliffe: the new chicks in their incubator! The children noticed that some chicks were fluffy and yellow, while those that had just hatched were brown and a bit sticky, or ‘sweaty’ as Kairo          described them!

This week, the Nursery children were very happy to welcome three new friends into their class: Kairo, Emily and Arynana. The new children have settled in very well already! The class has been thinking about Fairy Tales. They shared what they already knew on the topic, which turned out to be quite a lot. ‘The witch is going to get the princess!’ said Ellee. ‘A hero saves the day!’ said Albie. Tillie knew that ‘the fairy will help them’. The children also knew the names of lots of Fairy Tales: ‘Red Riding Hood…Rapunzel!’ (Remi), ‘The Ugly Duckling’ (Ollie). They enjoyed dressing up and playing in their new castle banquet role play too. In ,maths, the children learned about repeating patterns and discovered that they could make repeating patterns with actions as well as pictures. 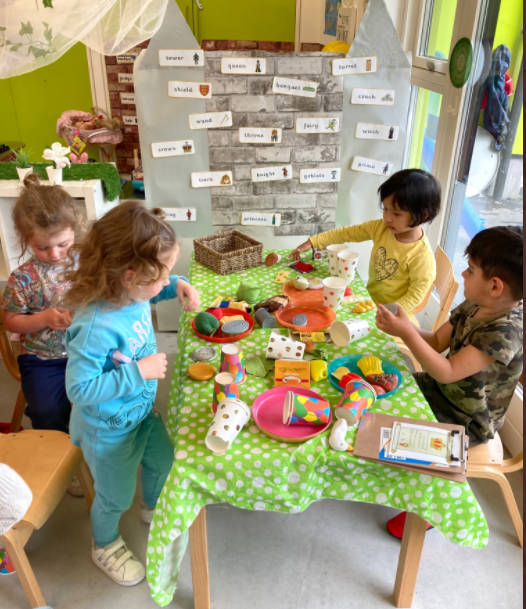 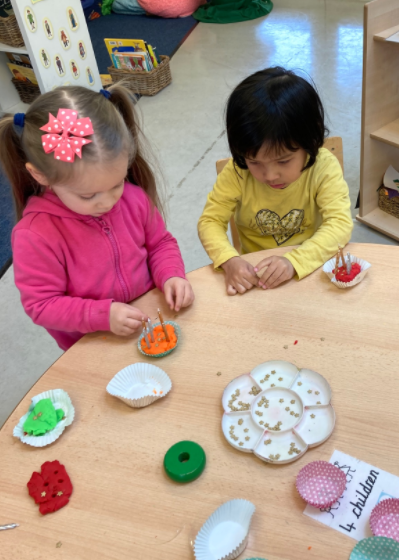 The Nursery children have continued to explore plants and biodiversity, learning about the different parts of a plant and how to grow their own beans. They used a bubble map and learned a song to remember the names of plant parts and talked about what they would like to put in their own gardens: ‘Red flowers…a butterfly’, said Ollie. ‘I would plant a beautiful flower!’ (Ellee), ‘Rainbow flowers!’ (Ethan), ‘Yellow flowers’ (Freya).

The children also used seeds to practise counting objects one by one and have loved playing outdoors with their new mud kitchen and car ramp (kindly donated by Ethan’s mum!) The Nursery children have been exploring the four seasons, through the journey of The Tiny Seed. They talked about what they liked doing in each season: ‘In Winter, you can have hot chocolate’, said Albie. ‘In Summer we go to the beach’, said Ethan. They also sorted clothes for teddies to take on a Summer and Winter holiday. In the garden role play, children dug and planted seeds. ‘This is going to be a flower for my garden,’ said Freya. Outdoors, they used large wooden blocks to build a plant growing taller and taller, just like the tiny seed. The new children helped to look after the plants, giving them ‘water’ (Henna) and ‘sun’ (Violet).